Island of Stromboli Around the island

The vision of the eruptions is especially impressive at night: we recommend the climb in the late afternoon and return at night or the following morning. The hike to the top of the volcano takes about three hours of walking uphill and two downhill and is not particularly difficult, but it is recommended for good walkers. The trip should not be undertaken in particular in the rare case of bad weather. At Stromboli there is a possibility of contact authorized local guides. For the ascent we recommend the normal hiking equipment; you need to bring along a flashlight, a pair of long pants and a spare T-shirt and, in the case of the excursion night, the sleeping bag. Do not forget a light windbreaker or a fleece to stay on top of where the temperature can be lowered. The excursion can be undertaken all year round, the best time is to be late spring for its mild climate and the temperatures are not too high. Even the summer night excursions in it comfortably.

Two countries that are located on the island: on the Northeast side, covered by a green mantle, stand out the square white houses of San Vincenzo, which extends north as San Bartolo, while to the south-west is Ginostra, thirty houses clinging to the rock, completely insulated (there are no roads, but only a mule track that climbs along the side of the hill), and linked to the rest of the world only by sea (and not for the whole year) through the smallest port in the world . To the north, in the part that separates the two countries, it is the most impressive side, arid and rugged, with the Sciara del Fuoco, the lava path chosen each time the volcano decides to erupt. In front of San Vincenzo is the islet of Strombolicchio, a rocky outcrop on topped by a lighthouse and a strange shape in which it seemed the shape of a horse's head.

The crater - The hike to the crater of Stromboli is a unique and fascinating experience that allows you to admire a breathtaking natural phenomenon. Through a course of rare beauty, with unforgettable views, you arrive in the presence of one of the few active volcanoes in the world. The crater is constituted by a group of five mouths. The persistent explosive activity is directly observable from a few hundred meters away: a succession of thunderous explosions that project into the air incandescent lapilli constituting a show that makes you forget the fatigue of the journey just ended.

Ascent to the volcano - approximately 5 hours. From the ferry to San Vincenzo we head towards the town, going up the paved road leading to San Bartolo. In a short time they exceed the typical white houses and take a mule track (follow the signs) initially paved with lava and then, after a few bends, dirt. In twenty minutes you reach the observatory of Punta Labronzo (refreshment point and the craters) where the climb itself. We rush hour straight to the top, along a beautiful trail surrounded by lush vegetation: the salt route with moderate slopes along numerous hairpin bends and comes out at the end of the trail, on a pulpit (be careful!) Which offers a wonderful view Sciara del fuoco, the huge black slope where rolling lava blocks from the crater into the sea. It abandoned the easy trail, you climb a steep path cut deeply into the soil. This veritable trench, dug by water erosion, permitting a short slope reddish lava that requires a bit 'of attention and the use of hands to ease the climb. After the easy climb is opened, to the left, a beautiful view over the village and Strombolicchio. almost 700 meters below. At this point the path climbs up on the wide ridge that leads to the top, always steep and sandy soil. Level with craters meet the first stations, consisting of low protective walls arranged in a semicircle, where you can arrange to observe the eruptions. From this height can be seen, between clouds of vapor and the other, the craters; along the last stretch leads you to the top of which is the observation point closest to the mouths. With favorable wind vision is to this exceptional point and unforgettable sight: tall and frightening explosions are tingeing red black of night. 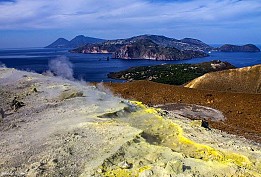 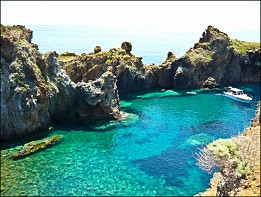 The Panarea colors are white lime walls of the houses and the turquoise of its waters. Panarea was ...