We start out from the town of Lipari to the north. The first place you come to is Canneto. Watching the sea and the gaze is captured by the islands of Panarea and Stromboli on the horizon. A constant of Lipari and the Aeolian is the landscape, a show that changes depending on your perspective, but always offers some island, islet or cliff that emerges from the sea.
Continuing the journey, the road begins to climb and the view is even more spectacular of cliffs, coves and views of the island of Salina. We are in the area where until the eighties of the last century was quarried pumice stone. One of pumice extraction effect was the production of a large amount of white powder poured on the beaches, creating enormous dunes and many years ago you could slip up in the sea.
After a swim in the crystal clear sea and white beaches of Porticello you can continue. A few stop to admire the view and take some pictures on the northern side of the island and the road begins to go down to the charming village of Acquacalda, stretched on the pebble beach, an oasis of light and silence with the white of the houses and the blue sea.
After a long break for lunch a few steps from the sea, fresh fish cooked according to the Aeolian recipes, we start from Acquacalda in the afternoon. On the western side of the island the road turns inland but continues to give great panoramic views. You cross the Quattropani countries and Pianoconte and more agricultural area of ​​the island. From the main road you can take detours down to the sea, one of which leads to the Terme di San Calogero, among the oldest in the Mediterranean, and now in a state of substantial neglect.
The view is to the east of Salina and south on the island of Vulcano. The last stretch before returning to the west in the city of Lipari you get to the viewpoint of Quattrocchi, are full of beautiful coves accessible by boat, the stacks and the sulphurous fumes of the craters of Vulcano. Finally we arrive at Marina Corta for a drink in front of the sea, the best end to a day in Lipari. 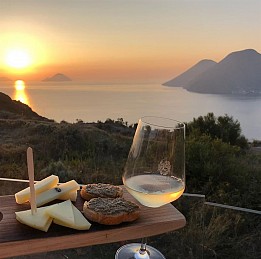 Guided tours traditionally start an hour and a half before sunset to make the aperitif in the ...

Walking through the streets of the historic center to discover Lipari, one of the jewels of the ...