Our day begins by leaving the port of Lipari, we will head towards the island of Vulcano.

Vulcano is the third largest island of the archipelago.

On the right you begin to see the coasts of Vulcanello, the youngest volcano on the island, on which is the famous "Valley of the monsters" where nature has enjoyed creating fantastic forms of lava, reachable on foot once landed.

We pass off the enchanting bay of black sands, famous for its long black sand beach, behind which stands the "Gran Cratere della Fossa" in all its majesty.

It is the active volcano of the island, a dormant volcano, of which it is possible to reach the top, with a walk of about an hour starting from the port.

From above the landscape changes completely and it almost seems to be on another planet of smoking rock and sulfur and the view ... is breathtaking.

Continuing the navigation, we find ourselves in an amphitheater of rare beauty, where we find the Grotta del Cavallo, famous for its play of light and the "pool of Venus" where it was said that the beautiful goddess came to take a bath.

Our journey takes us to Gelso, the southernmost part of the island, an almost uninhabited village, where we can see the lighthouse and the beaches of very black, fine sand that characterize this part of the island.

Finally, we skirt the steep coasts, where the seagulls make their nests and from which they launch themselves in search of food, to reach a small cove where, on a rock, the statue of a beautiful little mermaid has been placed to protect those who sail in these waters.

Finally, we will dock at the port in the late morning, greeted by the acrid smell of sulfur that pungently reaches our nostrils. This is the liveliest part of the island full of shops, bars and restaurants, and it is here that the motor ship leaves us in order not to miss all the possibilities that are offered to us. From the mud pool, to trekking on the volcano, from the discovery of its great beaches to shopping in its lively center, from the geothermal pools to the rental of a scooter to discover the interior, you will be spoiled for choice. Departure from the same port in the late afternoon. Departure from Lipari in the morning, our itinerary begins by skirting the castle of Lipari, Monte ... Departure from Lipari in the early afternoon, skirting Monte Rosa and the Canneto bay we will head ... Departure at about 9.30 am from Lipari, we will head towards the island of Alicudi passing through ... 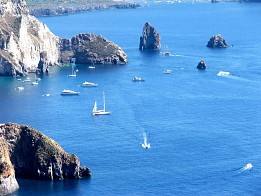 With the boat ride around the island, you can admire landscapes worked for millennia and wonderful ...