NB. EXCURSION NOT PLANNED NOW, THE CLIMBING TO THE TOP OF STROMBOLI IS NOT ALLOWED UNTIL DATE TO BE DESTINED FOR SAFETY REASONS. YOU CAN ARRIVE UP TO A HEIGHT OF 400 METERS.

Departure from Lipari in the late morning. It will be made two short stops in the island of Panarea, the first for a swim in the beautiful "Calajunco Bay" and the second to visit the small village. After skirting the nearby islets, stopping to "Lisca Bianca" to observe the fenonemo of the famous "sulphurous whirlpools" of Panarea, continue to Stromboli island. By mid-afternoon stopover in the main port and then guide you through the intended point of the gathering, where you will meet the guide who will accompany you on top of the crater. The duration of ascent and the descent is approximately 5 hours (3 + 2). The time spent on the summit, to admire the spectacular strombolian eruptions, it depends on the activity of the volcano, and varies from a minimum of 15 minutes to a maximum of 45 minutes. The return to Lipari is expected around midnight. 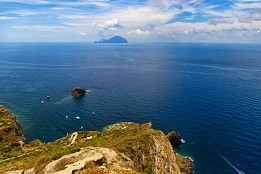 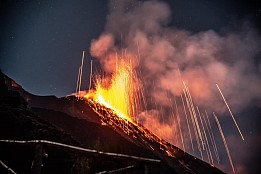 Departure from Lipari (Marina Corta) in the late morning and return at about 10.30 pm. Tour in ... 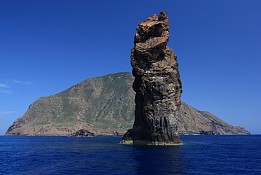