The Hotel La Locanda del Postino is a small family-run hotel located on the Island of Salina, in the Aeolian archipelago.

The Locanda del Postino is located in the hamlet of Pollara, in the small village of Malfa, which had the largest crater of the Aeolian Islands (1 km in diameter). Here you can find the Locanda del postino, a small hotel of 10 rooms, furnished in Aeolian style.

The farmhouse, faithfully restored, faces west on the sea as far as the eye can see, showing the splendid silhouettes of the islands of Alicudi and Filicudi visible.

Access to the Pollara beach is currently forbidden. The sea is reached by descending a staircase, which leads to the "Balate" a tiny fishing village built in the rock.

Here the film "Il Postino" was filmed with Massimo Troisi and Philippe Noiret.

The Locanda del Postino is in possession of the Ecolabel certification issued by the European Union for the environmental policy adopted during the construction of the structure and the care of the environment in the daily management. In fact, in local preparations, typical local products at Km 0 are used, plastic packaging has been abolished, electricity is produced from sustainable energy sources and rainwater is used for irrigation and discharges.

Capofaro was born out of the love that the Tasca d’Almerita family have for wine and sea, a ... 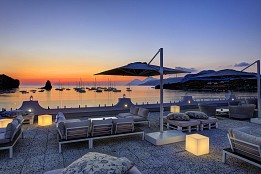 In the splendid setting of the Aeolian archipelago, a UNESCO World Heritage Site since 2000, just a ... 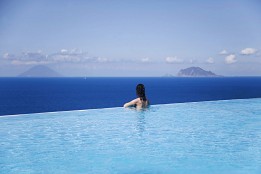 Hotel Ravesi is a boutique family-run hotel, located on the island of Salina, in the archipelago of ...

On the sea of Vulcano (Aeolian Islands) rises the Vulcano Blu residence, consisting of real estate ...